(This piece was originally written for the GVPTA blog, which you should go check out! And thank you to United Players for inviting me out to see the show.)

A Tale of Two Villains (The Prince’s Play)

I am a man who loves a mustache-twirling, overconfident villain. Be they supervillains, Shakespearean, or WWE heels, there is something about that almost-naive, all-consuming ambition that bypasses my moral core and makes me want them to succeed.

I’m curious who audiences will relate to, and wish success for, in the United Players’ production of The Prince’s Play, running from now until April 21st at the Jericho Arts Centre. 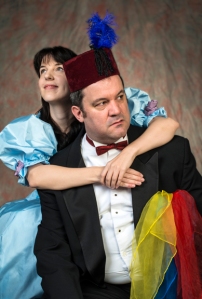 Originally written by Victor Hugo as Le Roi s’amuse (and banned the night it opened), now wittily adapted by Tony Harrison, we have in The Prince’s Play a story about two selfish villains who double as drinking buddies.

Holding all the power is the silver-tongued, philandering The Prince of Wales, played skillfully by Edward Foy (better known to me for his work in the D&D webseries Standard Action). As he seduces women with delicate words of true love (while shrugging off frivolous facts such as his wife), his sweet words speak like the loving finale to a great romance. It’s hard not to want him once, just once, to be speaking the truth, even as lines like “prey and predator at peace, that’s love” remind us of the game he is playing.

For his drinking buddy, the Prince keeps as his confidant the plaid-coated court fool, Scotty Scott (James Gill), a figure part Falstaff, part Feste. A common man socially isolated from the rest of the court, Scotty’s cruel jibes at court members may be forgiven when spoken in the presence of The Prince; there, such words make His Royal Highness laugh and speak honestly about the wolfish men The Prince keeps as courtly company. But even after The Prince leaves for another sexual conquest, Scotty keeps up his verbal assault on the rest of the court, so that it is no wonder Tourland (Sean Allen), Lord Gordon (David Wallace), and The Poet Laureate (Shannon Christopher Wright) seek revenge on the belligerent, drunken pest.

Scotty’s one redeeming grace, other than his pessimistic insight, is his Rapunzel-esque daughter, Becky, whom he keeps locked away, save for Sunday trips to church. Stephanie Dyck takes an unbelievably naive and loyal character in Becky and makes her not only believable, but heartbreaking, as she finds herself trapped by all the forces at work in the play.

Here is where most stories would have us root for the vengeful, loving father as he seeks to save his daughter, but even here Harrison counters that move with Scotty’s self-pitying expositions of the ‘why am I losing my happy place’ variety.

Some villains, such as The Prince, offer us escapism – a chance to live inside the skin of men and women more ambitious, calculated, witty, and selfish than ourselves. What he is doing is morally reprehensible, but the power is enticing. Others, like Scotty Scott, instead connect us to our own tragic flaws and speak as words of warning.

In The Prince’s Play, we see both. Who do you find yourself rooting for?