The Boys In The Band

It seems to always be when I have the most to say, that I have the least amount of time to say it.

Right now, my life is on a crazy tear, as I am partway through an incredible run of 17 performances of The Boys In The Band with Ghost Light Projects, and it has been an absolute privilege to work with such a diverse, talented group to put on a stunningly scripted, two-act power-of-a-piece on two weeks of rehearsals and a lot of gumption. Our cast ranges from a Film and TV veteran up on stage for the first time to a new VFS grad, from a working actor who earns a good living off his profession to the ’emerging artist’ (me). Decades between the oldest and youngest cast members. Now, don’t get me wrong – I enjoy working with teenagers (such as on the Panto) and actors in their early twenties, but I am also SO very grateful for the opportunity to work with men (and woman) who have a lot more experience in theatre and in life than I do. One of our fine actors works at the Make A Wish Foundation, and this show has been a wish come true indeed.

When I first graduated, I was worried I would leave school and promptly not do any theatre, fall into a dayjob and not get back out. So to counter this fear I took on every project that came along (and still do – let’s be honest). And so, since I graduated, I haven’t had more than three or four days away from a rehearsal or performance hall. Include school projects beforehand, and that run stretches probably longer than a year. But, being who I am (a new actor who can sing), most of my theatre work in the real world thus far has been in musicals, so to have the opportunity to sink myself into such a marvelous, serious, funny script as The Boys In The Band has been a great leveler. It has pointed out all the habits I own that I’ve let loose in musical-land, which don’t work so well in the realm of realism. My enunciation and lapses into over-articulation and sounding slightly British. My breathing habits. Finding the right level of energy with which to enter a scene and hit cues. Keeping up the pace.

And with last night’s performance, I feel we really hit our stride. Please, check us out – it is a fantastic show, and a landmark piece of queer theatre. (Sidenote: I take far too much pleasure in being a straight man playing a gay character, such an opposite to the usual circumstance.)

Tickets can be bought at http://www.brownpapertickets.com/event/217822 , and when the questionnaire asks who sent you, tell’em you bought tickets to see me. So I can get a bit of a commission on them to subsidize my bus tickets. Thanks; I appreciate it. And you’ll appreciate our fine show. 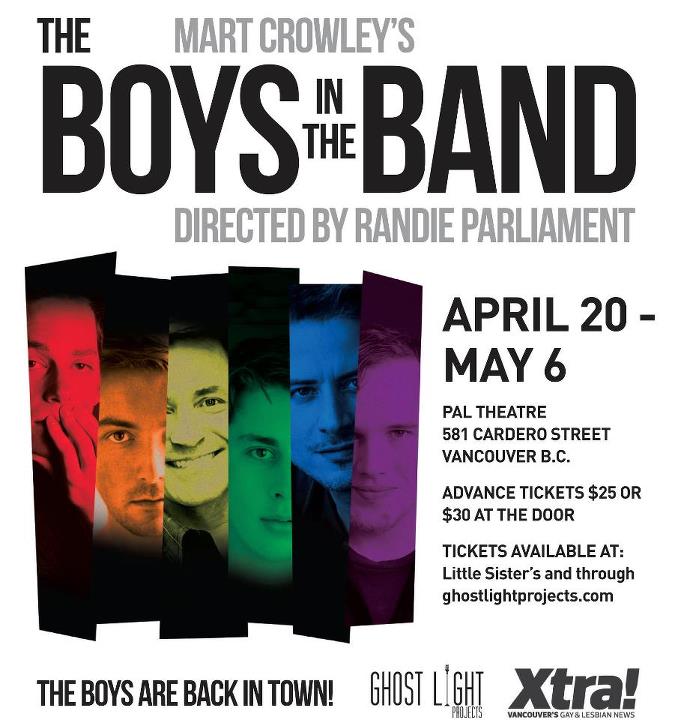 2 thoughts on “The Boys In The Band”