Hey Vancouver! What people have to say about The Hatter:

Hey Vancouver Fringe! Here are a few things people have to say about my show, The Hatter:

“A frenetic explosion of a well loved literary character…This was one-man theatre as I’ve never seen it… You must buy this ticket. You must take this ride.” – The Marble Theatre Review (Victoria)

“Andrew Wade shows fantastic range, flipping a switch between wackiness and depression… you’d be mad to miss this play. 4.5 / 5 stars! ” – The Saskatoon StarPhoenix

“Wade embodies the character of the Mad Hatter perfectly.” – Apartment 613

“The effect is phenomenal… It hits the right notes: it never takes itself too seriously; it shows a clear mastery of the style and text… a fascinating, frantic, engaging character who can draw our attention by simply being in the space… the Jabberwocky alone is worth the price of admission.” – Mooney On Theatre (Toronto)

“Wade’s performance as the jaded, lonely Hatter is a delight, convincing and poignant, not quite what one would expect, which is perfect for a Fringe festival… you quickly learn to expect the unexpected, which can only be attributed to Wade’s fine acting skills.” – London Free Press

“Clever and funny, with a polished, lyrical style.” – The Beat Magazine

What do YOU think? Come check out the show at Studio 16 on the times in the poster below, join the tea party, and then let me know!

The Hatter returns home… tonight until the 13th! 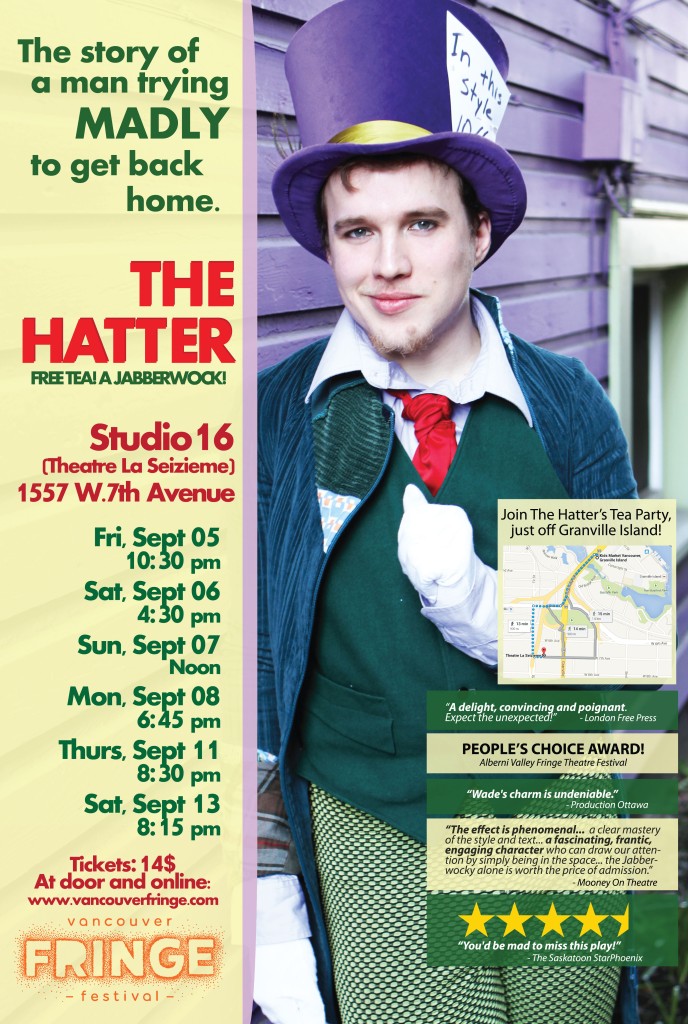